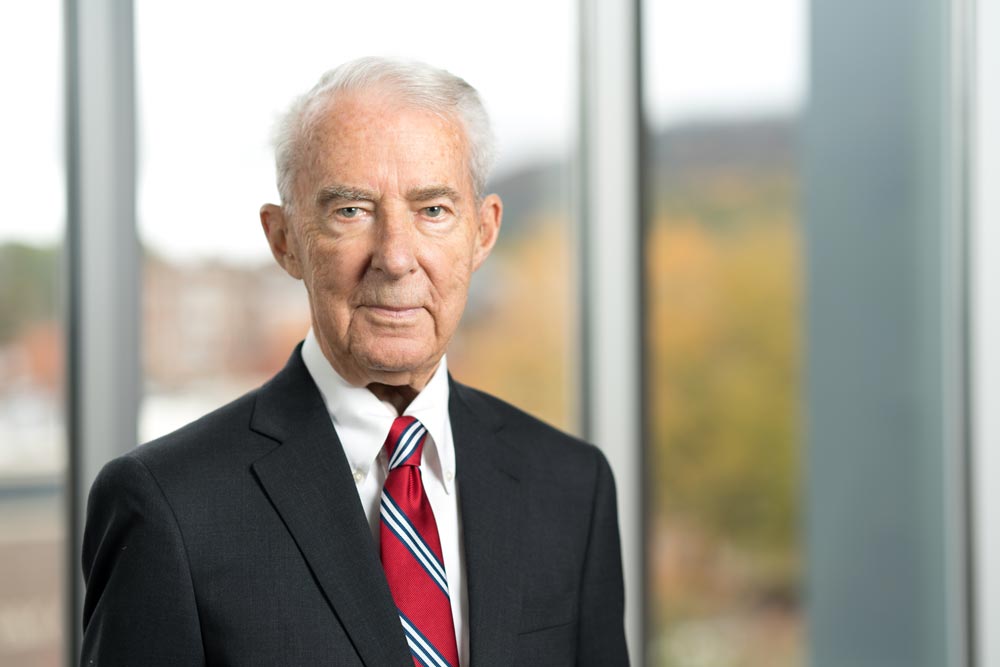 After 60 years of practicing law, attorney and founding partner Jack Stevens retired from the firm in January 2019.

Jack Stevens was proud to have helped build the Roberts & Stevens law firm and to raise a family in Asheville.

In addition to his professional and civic life, Jack was a lifetime outdoorsman and adventurer – his happiest moments spent outdoors with friends and family. Also an accomplished historian, he published the book A Short Buncombe County History in spring 2019.

Robert & Stevens announces that attorney and founding partner John S. “Jack” Stevens is retiring after 60 years of practicing law. Jack began his law career in the fall of 1961, practicing with attorney Anthony Redmond. The firm expanded to become … Read More >
08-16-18

Roberts & Stevens is pleased to announce that 16 of its attorneys have been selected by their peers for inclusion in the 2018 Edition of The Best Lawyers in America©, the oldest and most respected peer-review publication in the legal profession. Ad … Read More >
10-03-16

Three attorneys at Roberts & Stevens have been honored by their peers in Best Lawyers of America © 2017 as “Lawyer of the Year” in their respective practice areas for their expertise in this field. “Lawyer of the Year” honorees are Phillip T. Jacks … Read More >
08-17-15

Seventeen attorneys at Roberts & Stevens Law Firm have been honored by their peers in The Best Lawyers in America® 2016: Vincent D. Childress, Jr. in Corporate Law and Health Care Law William “Billy” Clarke in Environmental Law/Litigation and Natur … Read More >
08-18-14

Seventeen attorneys at the Roberts & Stevens law firm have been honored by their peers in The Best Lawyers in America® 2013: Sarah Patterson “Patsy” Brison in Administrative/Regulatory Law and Land Use & Zoning Law and Litigation Vincent D. Chi … Read More >
02-29-12

Jack Stevens, attorney and founder of Roberts & Stevens Attorneys at Law has practiced at Roberts & Stevens and given back to the community for 50 years. Stevens has a distinguished legal career representing large municipal corporations, the St … Read More >
09-08-11

Sixteen attorneys at Roberts & Stevens have been honored by their peers in The Best Lawyers in America® 2012: Sarah Patterson “Patsy” Brison in Administrative/Regulatory Law and Land Use & Zoning Law and Litigation; Vincent D. Childress, Jr. in … Read More >
08-17-10

To our clients, colleagues, and friends: The safety and well-being of our community is our highest priority. Like many of you, we are closely monitoring the outbreak of the coronavirus (COVID-19) and the impact it is having on everyone in our community and around the world. As the level of concern surrounding the virus heightens, we feel a strong responsibility to minimize any potential risk within the community. To that end, we are following guidelines recommended by the CDC – from implementing and maintaining diligent sanitation and custodial practices to minimizing person-to-person contact – while ensuring that all of your legal needs continue to be met with the same client service you are accustomed to receiving from Roberts & Stevens. At this time, our offices remain open, with many of us connected remotely. However, in support of social distancing, we are asking clients, if at all possible, to schedule phone conferences instead of coming to the office. Thank you for your support and cooperation. Let us know if you need us. We are here.