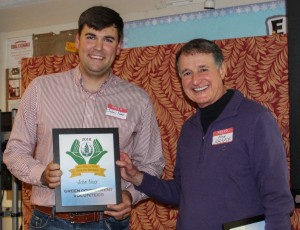 Roberts & Stevens attorney John Noor was recently honored with an Environmental Recognition Award from the WNC Sierra Club. These awards recognize local individuals, institutions and businesses whose actions reflect their commitment to preserving the environment. The awards were presented on December 6 during the WNC Sierra Club’s holiday party.

Noor, who chairs the Asheville Sustainability Advisory Committee on Energy and the Environment, and Asheville City Councilwoman Julie Mayfield were honored for their leadership in getting the City of Asheville to set a goal of having city government operations transition to 100% Renewable Energy by 2030 and supporting the Buncombe County Goal of having the entire county transition to 100% Renewable Energy by 2042. Thanks to Noor’s leadership, this goal was approved by the Sustainability Advisory Committee in August, and thanks to Mayfield’s leadership, it received a unanimous vote from the Asheville City Council on October 23.