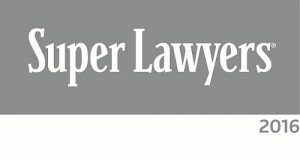 Roberts & Stevens, P.A. is pleased to announce that several of its attorneys have been named to the 2016 North Carolina Super Lawyers list.

Clarke has been named to the list for the 10th time and now joins Williams who has been on the Super Lawyers list for more than a decade.

The list, which was published recently in Super Lawyers Magazine and Charlotte Magazine, recognizes only five percent of the attorneys in each state. Attorneys are selected from 70+ practice areas and all firm sizes.

Additionally Stephen L. Cash and Ann-Patton Hornthal have been selected to the 2016 North Carolina Rising Stars list. Rising Stars lists are comprised of the top 2.5% of attorneys in each state who are 40 years of age or younger, or have been practicing 10 years or less.

Super Lawyers, part of Thomas Reuters, is a rating service of outstanding lawyers who have obtained a high degree of peer recognition and professional achievement. Annual selections are made using a patented multiphase process that includes peer nominations, independent research and evaluations from a highly credentialed panel of attorneys.

Roberts & Stevens is full-service law firm in Asheville, North Carolina. As one of the largest firms in Western North Carolina, it serves regional and national clients in 29 practice areas and industries. The firm works with large corporations, small businesses, family-owned companies, government entities and individuals. It has collectively been practicing law in Asheville for more than five decades.