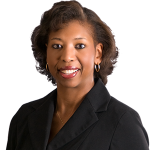 Jacqueline D. Grant, partner at the law firm of Roberts & Stevens in Asheville, NC, has been elected as the President of the 28th Judicial District Bar for the 2014-2015 term.

Grant is the first African-American female and only second African-American to hold this elected position. Grant has served the District as President-Elect in 2013-2014 and Vice-President in 2012-2013.

Grant, an Asheville native, has been very active in the legal and civic community since she became an attorney 19 years ago. She is a litigator at the law firm of Roberts & Stevens, P.A., where she has successfully represented individuals, businesses and organizations in a broad range of practice areas including medical malpractice defense, employment law, and complex personal injury at the trial and appellate levels in both North Carolina State and U.S. Federal Courts.