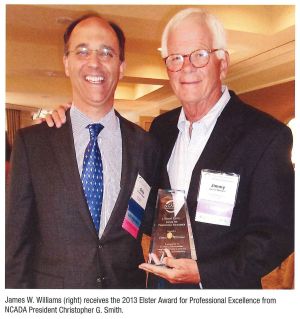 James W. Williams has been awarded the J. Robert Elster Award for Professional Excellence for 2013 by the NC Association of Defense Attorneys (NCADA).

This Award, named in honor and recognition of J. Robert Elster, a founding member and second president of the NCADA, recognizes NCADA members who exemplify the highest standards of professionalism, integrity and ethics and who conducts themselves in a civil, courteous manner with all persons. The recipient must exemplify sustained excellent service to individual and corporate defendants in civil litigation, to the Bar and to the community.

James W. Williams, a partner in the Asheville law firm of Roberts & Stevens, P.A. is a well-recognized trial lawyer in North Carolina who demonstrates the highest standards of professionalism throughout his years of trial practice earning him the respect of peers, colleagues, clients and trial adversaries alike both statewide and nationally.

Williams, a member of the NCADA since 1983, served as President of the Association from 1991-1992. Since then, Williams has continued to actively participate in the Association as a program speaker, committee chair, as well as assisting with long range strategic planning. Williams was instrumental in organizing the NCADA’s political action committee, the N.C. Defense Fund, which endorses judicial candidates in election years.

At the national level, Williams was part of a group of state defense bar leaders who assisted in the restructuring of DRI in the early 90’s from the research arm of the International Association of Defense Counsel to an independent membership organization. He served as the second chair of what was then known as the Standing Committee of State and Local Defense Organizations of DRI – and as NC’s first State Representative.

Additionally, Williams has held leadership positions in the American College of Trial Lawyers and the North Carolina Bar Association, serving on each organization’s Board of Governors from 1993 to 1996. He is one of a small group of trial lawyers who is both a Fellow in the American College of Trial Lawyers and a Permanent Member of the Fourth Circuit Judicial Conference. He is a past president of his local district bar, the 28th Judicial District, and has served his community by volunteering in and leading several civic organizations in the Asheville area, including the United Way and Manna Food Bank.

Williams has focused his trial practice on representing hospitals, healthcare providers, other businesses and individuals.

The NCADA is pleased to recognize James W. “Jimmy” Williams as the 2013 recipient of the J. Robert Elster Award for Professional Excellence. 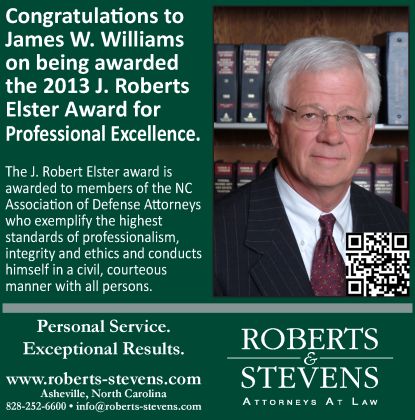