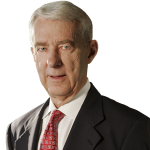 Stevens has a distinguished legal career representing large municipal corporations, the State of North Carolina in insurance matters, private schools and colleges, and family-owned businesses. Stevens remains an active partner who is credited with shaping the approachable culture of the firm. His areas of focus include business/corporate law and higher education.

In his early career, Stevens served four terms in the North Carolina House of Representatives General Assembly (1969–1976) and was Chairman of the House Rules Committee during the 1975 session. Over the years, he has continued to be active in the North Carolina Bar Association, including a term as President.

Among his accomplishments, Stevens is an AV Preeminent Peer Review Rated lawyer by Martindale-Hubbell, named to The Best Lawyers in America in Corporate Law since 2008, named a North Carolina Super Lawyer and has received the North Carolina Bar Association Centennial Award.

As an Asheville native, he is proud to have had the opportunity to build a law firm and, of equal importance, raise a family in Asheville.