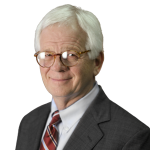 James W. Williams, Roberts & Stevens’ attorney, has been named as the “Asheville Best Lawyers Medical Malpractice Lawyer of the Year” for 2011.

Only a single lawyer in each specialty in each community is being honored as the “Lawyer of the Year” who has received particularly high ratings in the Best Lawyers surveys by earning a high level of respect among their peers for his abilities, professionalism, and integrity.

First published in 1983, Best Lawyers is based on an exhaustive annual peer-review survey of more than 3.1 million votes on the legal abilities of other lawyers in the same and related specialties.