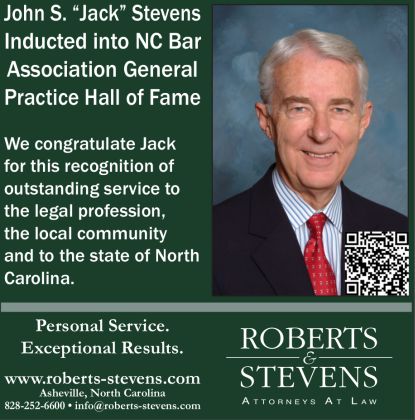 Jack Stevens began his law practice in 1961 in Asheville. Jack’s practice as a young lawyer was the same as most attorneys at that time. He was a general practitioner who represented clients in real estate matters, trust and estate planning, corporate and commercial matters and in civil trials in State and Federal courts. Currently his practice includes business, corporate, trust and estate matters, hospital and health law and higher education law.

In 1986, Jack’s firm merged with another Asheville firm to become Roberts & Stevens, which focuses on providing the highest quality legal services to the business community, governmental agencies and individuals.

With a distinguished legal career, Jack remains an active partner who is credited with shaping the approachable culture of the firm. The quality of Jack’s legal practice and expertise are unsurpassed. For 42 of his 52 years of practice he has been designated as an AV Preeminent Peer Review Rated Attorney by Martindale-Hubbell. He has also been recognized by Best Lawyers in America, Business North Carolina’s Legal Elite and North Carolina Super Lawyers. Jack was presented the North Carolina Bar Association/28th Judicial District Bar Association Centennial Award in 2008 for outstanding service which benefits his local community. He was also honored by his firm, 12 years ago, when they unanimously created the “John S. Stevens Justice Fund” at the North Carolina Bar Association Foundation.

Jack is known in this community and state as an outstanding lawyer and good citizen. With his exceptional service to the legal profession, the local community and the state of North Carolina, Jack Stevens epitomizes the high excellence of the North Carolina Bar Association’s General Practice Hall of Fame.