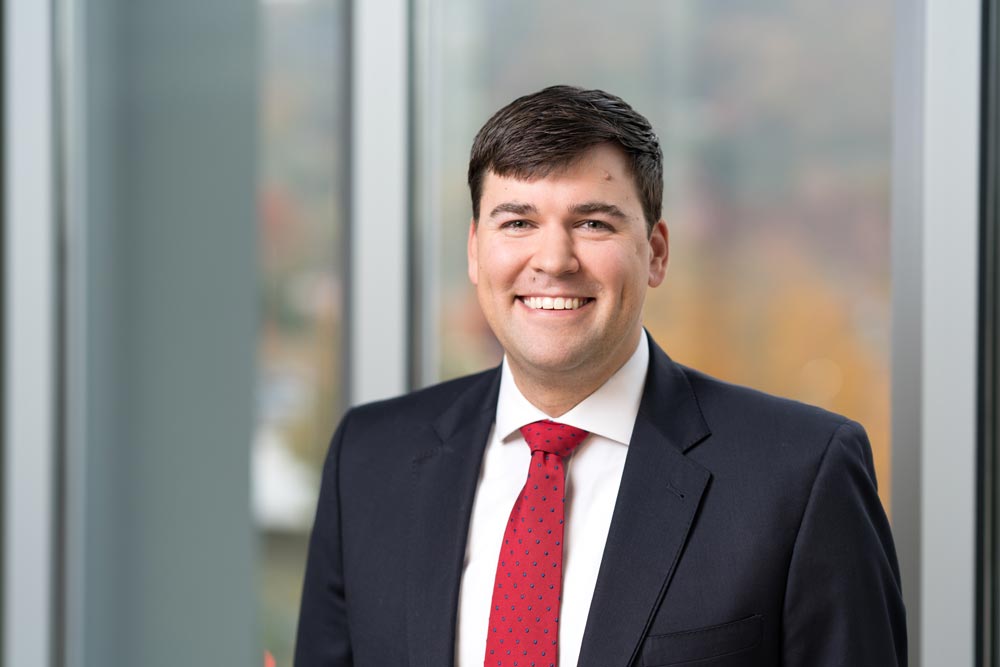 John Noor is a litigation attorney focusing on environmental law, complex business litigation, governmental affairs, and public policy. John joined the firm in 2013, after serving for two years as a law clerk to the Honorable Calvin E. Murphy on the North Carolina Business Court. Prior to his clerkship, John was a summer clerk to the Honorable Robert C. Hunter, Jr. on the North Carolina Court of Appeals and, before attending law school, worked for UNC President Erskine Bowles.

John, a North Carolina native, serves the Asheville community as a volunteer domestic violence attorney with Pisgah Legal Services and is a member of UNC Asheville’s National Alumni Council. John and his wife, Caroline, currently reside in Asheville.

Roberts & Stevens is pleased to announce that attorney John D. Noor is being recognized for his pro bono work with two back-to-back awards: the 2021 Carolina Law Pro Bono Publico Alumnus of the Year Award, given by UNC School of Law; and the 2021 N … Read More >
01-15-21

Roberts & Stevens is pleased to announce that three of its attorneys — Ann-Patton Hornthal, John D. Noor and Wyatt S. Stevens — have been selected by their peers for inclusion in the 2021 edition of Business North Carolina’s Legal Elite, a listing … Read More >
08-24-20

North Carolinians are facing unanticipated legal needs and questions as they adjust to the new normal in the wake of the COVID-19 pandemic. To help people navigate these uncertain times, the North Carolina Bar Foundation has partnered with NC legal ser … Read More >
01-29-20

Roberts & Stevens Attorney John Noor has been invited as a panelist at the American Bar Association’s 2020 Joint Regional CLE Program in Aspen, Colorado on Friday, January 31. Noor will appear on a panel entitled “Public Nuisance Law and Its Impact … Read More >
03-04-19

Roberts & Stevens is pleased to announce that six of its attorneys have been selected for inclusion in the 2019 North Carolina Super Lawyers list. Each year, no more than five percent of the lawyers in the state are selected by the research team at … Read More >
01-02-19

This Friday, April 13, John Noor will deliver an update on The Latest in Environmental Law to the spring conference of the Carolinas Air Pollution Control Association, held at the Omni Grove Park Inn. His session will include an upd … Read More >
01-31-17

Attorney John Noor was featured as a guest columnist in the October 2, 2015 edition of the Asheville Citizen-Times newspaper.  His article is entitled, “How do we address sexual violence in the digital age?” and focuses on House Bill 792, whi … Read More >
04-07-15

On May 15, 2015, Roberts & Stevens attorney John Noor will speak about litigation in the North Carolina Business Court and the recently adopted Business Court Modernization Act at the 28th Judicial Bar District’s CLE titled “The NC Business Court a … Read More >
11-21-13